What else can explain a sudden spurt in hot blogging action at 6:00 in the morning?!?!

I just came home from a two week vacation in Taipei, where I totally spent some SOOPER DOOPER HIGH LEVEL quality time with the family. Got to spend almost every moment with mom: 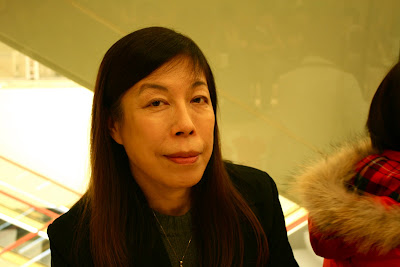 And reunited with Dad and my 90 year old Grandma: 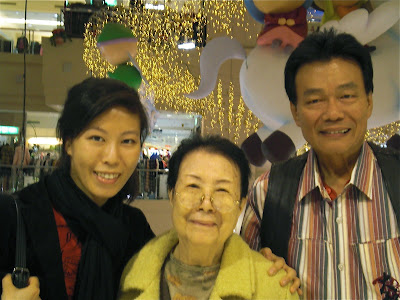 That's right. My grandma is 90 YEARS OLD. Ain't she the cutest?

While staying home with mom, I discovered that as much as things change, some things do indeed (sigh) stay the same. Case in point, the boxes are STILL piled up in our house: 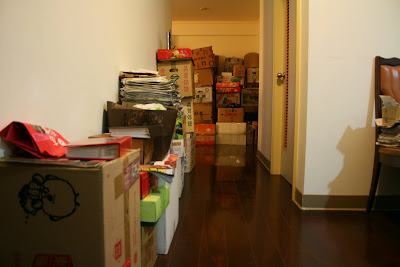 Posting this photo is guaranteed to get me murdered by my mother.

But oh! there is a bright glimmer of hope light shining through this clutter. Took Mom to Muji and Daiso and she was very receptive to their idea of home organization and simplified design. YES!!! So much so she took a catalog...also, she offloaded a closet full of clothes from the 80s into my trunk. I imagine if I can bring back stuff from Taipei each time I visit, I myself can get this apartment cleared in like...ten years.

Posted by Hellinjay at 10:45 PM No comments: 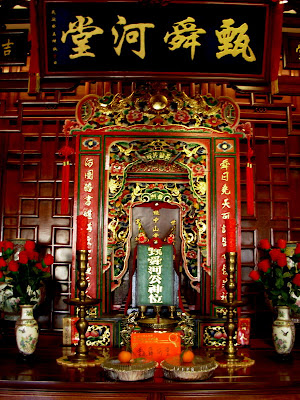 (This is a shrine to the progenitor of my family name, Gin Sun Hall.)

Do you know...that another way to spell my last name in English is ....

From now on, I am no longer drinking pomartinis or beer. Just gin. Only Gin & Tonics for moi! It's my ancestral duty!

I feel as if I'm the scion of a wealthy liquor making family....the Coors, Busches, Millers of the world...and me!

But seriously, I find this is pretty wild. Apparently, there are SO FEW Chinese people in the world with my last name, there is an organization that brings us together.

Basically...I'M AN EXTREMELY RARE AND ENDANGERED Chinese person. Us Gins are like the freakin' snow leapords and (haha) Giant Pandas of Chinese people! Unlike the rest of the Chinese people, I guess Gins have been following the one -child rule and flying SOLO for dynasties and dynasties... so my singlehood isn't my fault. I can blame my non-existent personal life on the fact that it has been predestined and ingrained by the fate of my inherited DNA. (phew!)

Oh wait- further online sleuthing has revealed that some jerk emperor wanted to kill off my ancestors. Sigh, sadly 'twas the practice of the time. In ancient China, should you cross the wrong person, not only were you killed, but that same honor was extended throught your entire family. From the eldest white haired Gin to the days old baby Gin, all would be slaughtered because you got fresh with one of the Emperor's 500 plus concubines. Sheesh! So a lot of us changed our last names....but the BRAVE ONES didn't!

So yea, we could also be the Dodo birds of the Chinese people. (yay?)

There's even a GIN WORLD CONFERENCE that's held every year. And a SHRINE to my family name in San Francisco!

Haute to the Bitter End 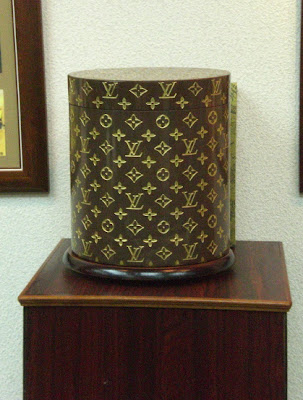 (Note: this post describes an event that occurred about a year ago. Enough time has passed for me to look at this photo and laugh without any sadness and gain a new perspective about that day.)

I came across this urn...how else? um, urn shopping. We were in Taipei and in the process of selecting one for my awesome, amazing, beautiful grandmother who passed away last year.

At the time, my family and I had been operating as husks of people. Our tears, life and soul juices had been sucked away by grief and the stress of settling her affairs. We couldn't even remember when we'd felt anything but sorrow and tiredness. The shop owner was properly somber and solicitous as he showed us his inventory which was housed behind glass cabinets and lit by flourescent lights.

I turned my head, and saw it sitting on a podium outside of the glass.

Everyone in the room turned to look, and then I heard a

My mother turned to the owner of the urn shop and breathlessly asked,"Is it real?"

The owner dropped his act and spoke to her like a normal human being.

In a casual tone he replied,"Oh of course not. Louis Vuitton definately doesn't manufacture urns. This one was a custom job, we handle those too....and sometimes... we get some odd requests."

I took out my digital camera and the owner nodded his head, granting me permission.

He beamed. I'd taken his bait.


I know it might seem initially cruel or disrespectful to laugh at something like this. But in life one of the things that had really gotten on my grandmother's grits was materialism. She herself was a wealthy enough woman, but had felt that luxury brands were pointless...and the people who loved them were misled fools who paid good money to act as walking billboards . Simply put, had she been in the room with us, she would have gasped and said,"真的嗎？！這是真的嗎？！開完笑！" ("HONESTLY?! IS THIS FOR REAL? ARE YOU KIDDING ME?!??!" )

And because of her influence, her children and grandchildren all felt the same...and could finally share in a laugh over something that would have sent my grandmother into bouts of laughter for daaaaaaaays.

In the end, we went with a simple yet elegant pale rose jade. She would have loved it.

( Those Hello Kitty urns were made for adults...had it been for children it would have been less funny and more logical. Well, at least to us.)
Posted by Hellinjay at 4:55 PM 4 comments:

Hellinjay
I am an upstanding citizen who likes comfortable shoes.

My Friends...At Least We Can Be Together Online: